This temporary mural installation presented unique and varied perspectives on race and belonging by four artists: Tanya Talamante, Emmanuel Christian Tedjasukmana, Isha Ibrahim, and Monica Wright. Each artist employs a distinct approach to working the mural surface, accompanied by a deeply personal narrative that heightens the emotional resonance of each image. As a group, the murals assert the power of individual stories to help shape perceptions and conversations about race in our public spaces. The works traveled to multiple outdoor locations in Burlington before returning to the artists.

These murals are the first in a series of public art partnerships between Burlington City Arts and Burlington’s Office of Racial Equity, Inclusion, and Belonging. The goal of the partnership is to create space for Black, Indigenous, and other People of Color to share their unique stories with the world and to create visibility, through artistic expression, for the impact racism has on our society.

Monica Wright is a designer and artist from Vermont. Her work is more recently inﬂuenced by her experiences as a biracial woman, the violence perpetrated against BIPOC women, and a need to further understand the impact of colonial power on global sustainability. In 2017, she earned a BFA in Fashion Design from the New School, Parsons. Her interest in sustainable systems, especially within the fashion industry and the elimination of textile waste, has led her back to the east coast where she’s developing her own projects, and navigating her next steps back into the ﬁeld of fashion.

The I See You mural is like a coming out. I’m coming out as a bi-racial person. Physical appearance says what we are before we even have the chance to verbally speak. I am Filipina and I am White. The mural is inspired by my own experience, and the effects of growing up in a predominantly white environment. Soft sculpture elements have been both hand- and machine-sewn to create a mixed media painting. My background is in fashion design, and my creative interests include sustainable production systems and textiles. On an ending note, I wanted to express my gratitude for the local BIPOC community. During a time of isolation and fear finding connection amongst you all has kept me hopeful.

Tanya was born in Tijuana, Mexico. Her career as a professional artist took off in Los Cabos, Mexico, where she is known as a one of the first artists of the Baja Art Movement. Flowers, native Indians, and bright colors were consistent themes in her early collections. She obtained her bachelor degree in product design from the Universidad Autonoma de Guadalajara and later attended the School of Fine Arts in San Miguel de Allende. From 2001-2010, Talamante lived in Arizona, California, Maine, and Vermont. In 2010, she settled back again in Los Cabos, where she founded Studio TT Art School and Gallery, which evolved into the first formal school of art in Los Cabos. Now her studio is in Vermont and she will be teaching art in local schools.

Abre Tus Ojos. I think the role of artists in social change is very important in this time. I’m very fortunate to be able to work in two countries and see firsthand the frustration and racial injustices of the world we live in. Personally, I think we as artists need to shift the way people think about the world. It’s our job to imagine the possibilities, shift the thinking of individuals and situations to our presentation of them, to explore the gray areas that make humans complicated and interesting, and to uplift the hope and resilience of communities we are part of. In my work, Abre Tus Ojos (Open Your Eyes), I want to recognize humanity as a whole. I want to challenge our own entrenched ways of thinking as people, parents, grandparents, and as a society.

Isha Ibrahim is a 17-year-old Muslim woman and the first generation of her family to grow up in America. Her parents were from Somalia and she was born in Kenya. She is currently a senior at Burlington High School.

For this mural I had the idea of representing my background as a Black Muslim girl growing up in America. I used many things like the map of Kenya and Somalia, Arabic, and the hijab. I wanted this to be more abstract than anything. I have the colors red, whit, and blue to represent my American side. And I have the “Resist” hand symbol to represent the Black Lives Matter movement in America. Another thing I have in this mural is the tribal print usually seen on traditional Somali dresses to represent my African background. Looking at the sketch, you will see an image of a Muslim girl wearing a hijab and what looks like a blindfold on her eyes. The blindfold is red, white, and blue to represent America. This can symbolize that I’m carrying my culture with me, but I see the world through an American system. The Arabic written says “bissmilahi rahmani Rahim,” and that translates to “in the name of Allah the gracious the most merciful.” This is a phrase used before each chapter in the Quran, and is used daily by Muslims.

Emmanuel Christian Tedjasukmana is a nurse, designer, and artist originally from Michigan who lives and works in Burlington. Prior to receiving a Master of Fine Arts degree in Emergent Media from Champlain College in 2019, he graduated with a BS in Nursing and a BA in Spanish in 2010, and has worked at UVM Medical Center as a nurse since 2011. He is most interested in finding various methods to meld art, activism, and nursing together, and his artwork and designs frequently employ symbolism related to his personal experiences. He is a first-generation American, born to parents who are Chinese-Indonesian immigrants.

My mural, entitled The Assimilation of Emmanuel, was a chance for me to take an introspective look at the way my assimilation into American culture had an impact on my identity. It was also a medium in which to visually convey my family’s story and provide a way to provoke further thought and conversation on the topics of assimilation, identity, and belonging, and the stigma of accents. It also had the purpose of calling attention to the various sacrifices to identity that migrant families must endure in hopes of achieving this wildly distorted concept known as the “American Dream.”

Through the symbolism in my painting, I wanted to highlight the sacrifices that my mother and father (who in the mural are both represented by a Chinese and Indonesian mythological figure) underwent as they made the difficult decision to assimilate our family into American culture through the act of linguistic assimilation. To achieve this meant that they would withhold our native language of Bahasa (Indonesian) entirely from us and focus on only teaching us English (which is symbolized by the tying of my father’s tongue and the suturing of my mother’s mouth shut). They believed that in doing this, their children wouldn’t exhibit any signs of a foreign accent with the hopes of having us fit in more—and as a result, be less likely to be discriminated against or be made fun of.

Despite this sacrifice to curate or 'knit' our tongues and protect us, we would all come to the realization that regardless of how well we spoke English or identified with American culture or were educated through the American school systems, the sacrifice was in vain—and we would regularly be viewed as a “foreigner”: often based solely on our physical features or by how difficult it was to pronounce our last name. We were not viewed as Americans, but rather as “bananas”: a slur meant to symbolize that we were yellow on the outside but white on the inside. This slur would not only be used against us by Americans as a way to insult us, but by Chinese and Indonesians as well in order to alienate us and make us feel like we also did not belong.

It is through this canvas that I want to draw attention to the fact that even though many people still encourage and romanticize the colonizing practices of assimilation as this wonderfully enlightening 'saintly' and almost a redeeming act from one’s “strange,” “uncivilized,” and “foreign” culture, you are in fact robbing an individual of their identity and depriving them of their existence, their connections, and their rich heritage and culture that society has not taken the time to understand or appreciate—thus rendering us silent.

Being that we are all immigrants in one way or another, why are we still under this harmful misconception that one culture must conform to another in order to have a sense of belonging and security? We need to redefine our view of what an American looks like and is, because what does it even mean to be American in this day and age anyway? 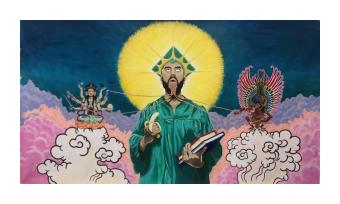 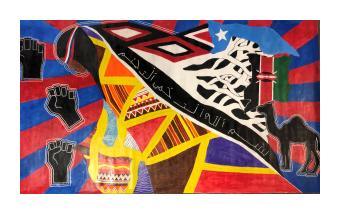 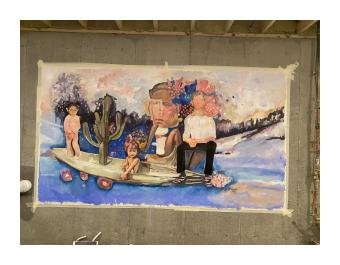 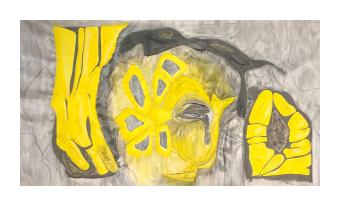