Produced after the ‘91 International Sculpture Symposium at William’s studio in Barre, Vermont, this work was carved out of a piece of granite split off from the tallest cornerstone of the composition at the Moran Plant. Originally intended to have an east/west orientation to serve as a solstice marker, the City decided on its present orientation and it became a sculpture without the calendar function. The two salamanders were intended to symbolize our dependence on clean waters and man’s amphibious origins. The general health of amphibians are a direct indication of the conditions of our fresh waters. The small carvings were vandalized within a few days after installation. The heads are missing but the bodies still remain visible. 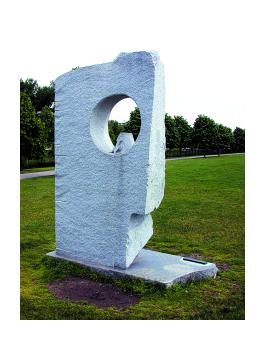