This statue was erected in memory of Ethan Allen, best known as the infamous leader of the Green Mountain Boys, a citizen’s militia charged with protecting ownership of what is now Vermont against the claims of ownership by the corrupt government of New York. As an outspoken, well-read and politically active personality, he made significant contributions to Vermont’s early history and the attitudes of independence that still pervade Vermont today. While he was rumored over six feet tall, no portrait of Ethan Allen exists, and depictions like this one were defined by a traditional commemorative style rather than accurate representation. 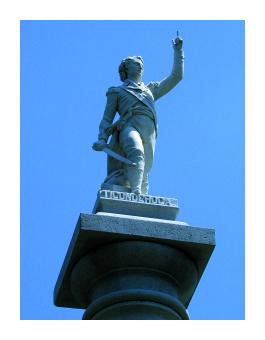