The artist behind the moniker LMNOPI is Lopi LaRoe. Classically trained as an oil painter, LMNOPI uses her artistic skills as a way to amplify messages emanating from within movements for social, economic, racial and climate justice. Her primary mediums are painting and printmaking, which she utilizes to create both sanctioned and unsanctioned interventions in the commons. Prior to creating the street artist persona LMNOPI in 2009, she has been a community organizer, humanitarian worker & civilly disobedient activist over the last four decades, standing elbow to elbow with the people & communities she depicts in her work. A terrain of strength and humor, defiance and resilience, love and bravery emanates from the faces of the women and children she paints. LMNOPI has created over 20 murals across the US since 2009. 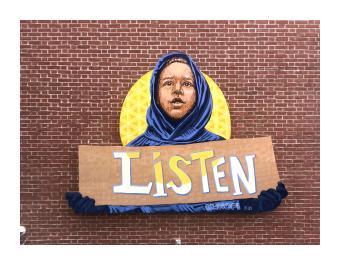