The statue, which rests on a column of polished black granite from Quebec, depicts the French explorer as he might have looked in July 1609 when he arrived in the region by canoe. The 39-year-old explorer Champlain is posed kneeling, looking out on the lake with a spyglass. Sardonis said he wanted to offer a more modern interpretation of the famous explorer by including the telescope, which he saw as a metaphor for both education and knowledge, as well as a symbol for his vision of a new world. His image of Champlain also breaks some other statue stereotypes by making Champlain clean-shaven, shirtless and barefoot.

In recent years, the sculpture has elicited critique among the student body for disregarding the consequences of colonization for indigenous people. Chief Don Stevens, the chief of the Nulhegan band of the Coosuc Abenaki nation, has suggested adding an equally prominent statue representing the Abenaki rather than tearing down the statue of Champlain. 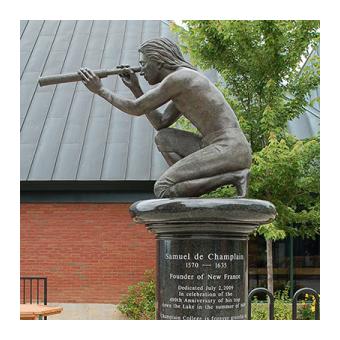