Located on the water's edge in Roundhouse Park, this grouping of sculptures is part of a project conceived and coordinated by Justin Rose. Rose was one of Paul Aschenbach’s students at UVM and it was there that he developed an interest in collaborative work. While Aschenbach encouraged the agreement of an overarching theme to provide a sense of unity in collaborative work, Rose preferred a loose concept tied together by the process of creating sculpture on site, a theme exaggerated here by the fact that each artist created and left behind sculpture exactly on the site where the marble was found along the water’s edge. This process draws attention to Burlington’s unnatural geological history, since much of the city is actually built on marble fill used to reduce its originally swampy nature. 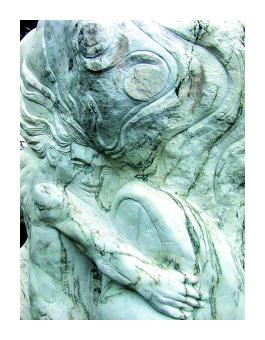