The design for "Whale Tails" was originally a finalist for a museum front in Anchorage, Alaska, but the cost of producing the piece in bronze was greater than the museum’s budget. A friend of the artist, who planned to open a hotel in Randolph, then commissioned him to carry out the sculpture in granite for the hotel front. The Whale Tails were installed, but the hotel was never built, so the sculpture spent a decade in a dramatic open field in Randolph where they became a landmark on Interstate 89. When the property sold, the new developer saw the piece as an expense and a liability, and gave the previous owner a year to sell it. In 1999, the piece was sold to Technology Park to serve as the centerpiece of a walking path. 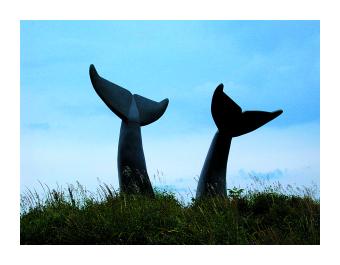