The Winged Monkeys of the clock tower were originally made in 1975 for a waterbed store in downtown Burlington called “The Emerald City of Oz.” This piece actually boasts a fascinating story of theft. After the waterbed store moved to the Shelburne Road, the male monkey was stolen from the roof and disappeared. Months later, the thieves were nabbed in a stakeout and the piece was returned to the store owner. In 1997, the waterbed store closed and the monkeys were taken to the roof of One Main Street. 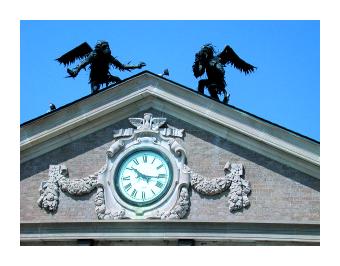